If you’ve got a bit of time there’s plenty of guides on how to set up Git and Powershell but to make things simple we’re just going to go ahead and download GitHub Desktop. Phil Haack did a pretty good job at convincing me that even though GitHub Desktop is a GUI app - it’s a great way to get the Git command line set up and kept up to date also. In-fact that single blog post made the whole process ridiculously straight forward.

My favourite things GitHub desktop does is

We write the script - it’s super simple. It’s designed to be placed in the parent folder of your Git repositories and it will run git pull on all sub folders that contain a .git directory. As long as you’ve granted GitHub Desktop access to your remote repositories you will not have to re-enter your credentials each time you run the script.

Here’s the script - I’ve split it into two parts.

You need to have two snippets up the top to make sure it’s configured to use all the goodness GitHub Desktop set up for us.

Part 2: Run git pull on all of our repositories

Now we literally just need to step through all the relevant repositories.

When you run the script using the sync.bat you should see something like this. 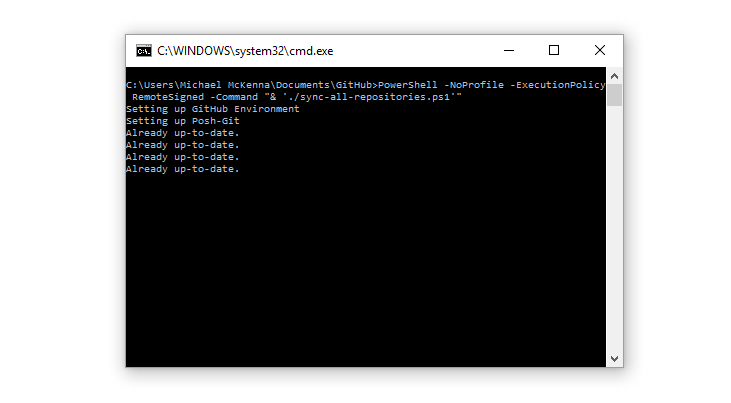 Thanks GitHub Desktop. Too easy :)